Dodging and Burning for Birds

A topic that I thought might be of interest to people that are starting to edit birds would be how to punch up an image using very simple dodge and burn techniques.   In simple terms, dodging is brightening or raising the exposure of a specific area of an image, while burning is lowering the exposure in a selected area of an image.

When looking at many avian images, we see some that can be a little flat or might have distracting elements in them.  My guideline for editing is to burn down parts of the image that I want to de-emphasize and to dodge areas that I would like to emphasize.  Simply, I am trying to direct the viewers focus by lightening some areas and darkening others.

1- darken area along the tail side, behind the bird and below

2- brighten areas leading to the head, which creates a visual lead into the subject

3- selectively dodge the eye and also possibly burn areas of the eye to add contrast where needed.  Sometimes this may also extend to the areas like the bill or wings.

Before providing a visual example, know that there are a few ways to accomplish this.  I am going to link a couple videos that show different techniques, including one by my friend Ray Hennessy.  He uses a similar approach to mine by using simple "curve adjustment layers" in Photoshop.  His link is below to a super simple explanation of curves adjustment to dodge and burn:

I would personally recommend using separate layers for each dodge and burn effect.  This allows you to fine tune each separately later on by adjusting the strength of each using "opacity."  At the end of the article, there will be another YouTube link that will show a practical application.

Now on to a real example.   I took a portrait of a Black-throated Green Warbler (BTGW) the other day and when editing, I used a technique that is pretty typical for me and I thought this would make a nice example.

Here is the original image after I did a few minor corrections in Adobe RAW (same adjustments that would have been made in Lightroom): 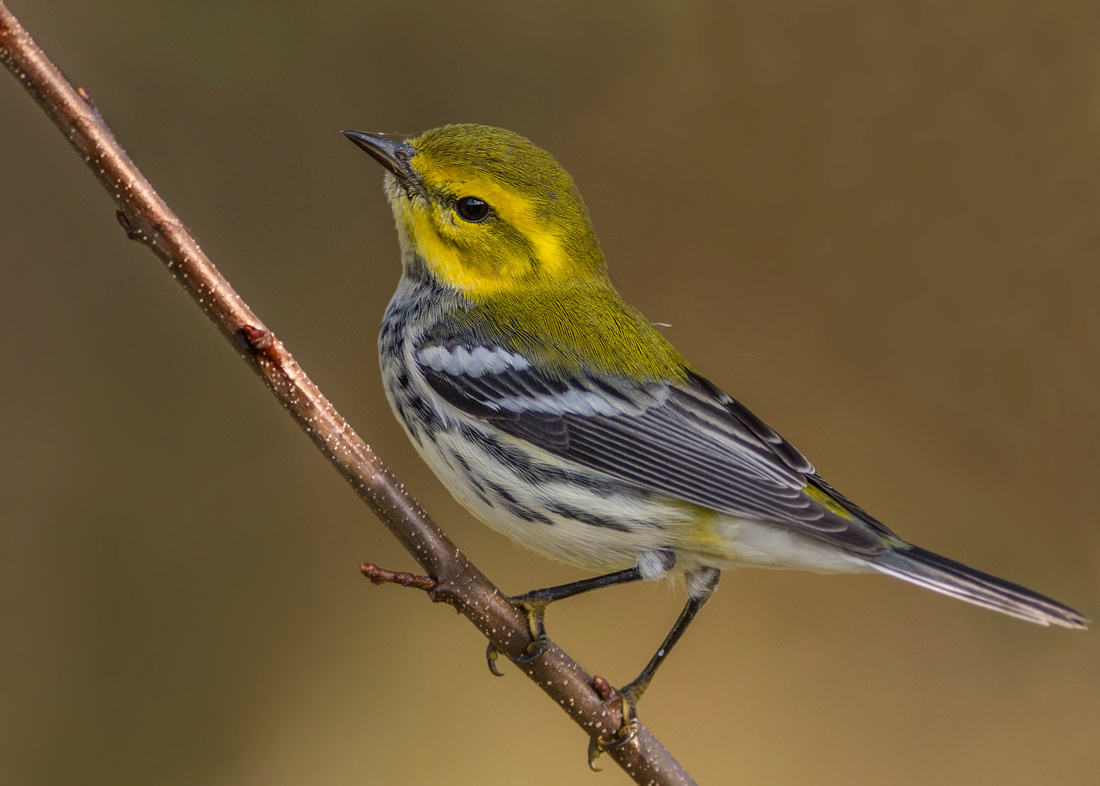 In the image above, I want to just bring the bring the focus to the head a little more and with some modest adjustments, I think we can do that.

The image below shows the areas that I am looking to adjust.  The light lines represent areas that I consider dodging and the darker lines are areas that I would consider burning.  Once these large areas are done, I will go back and look at the eye and any other areas that I want to highlight. 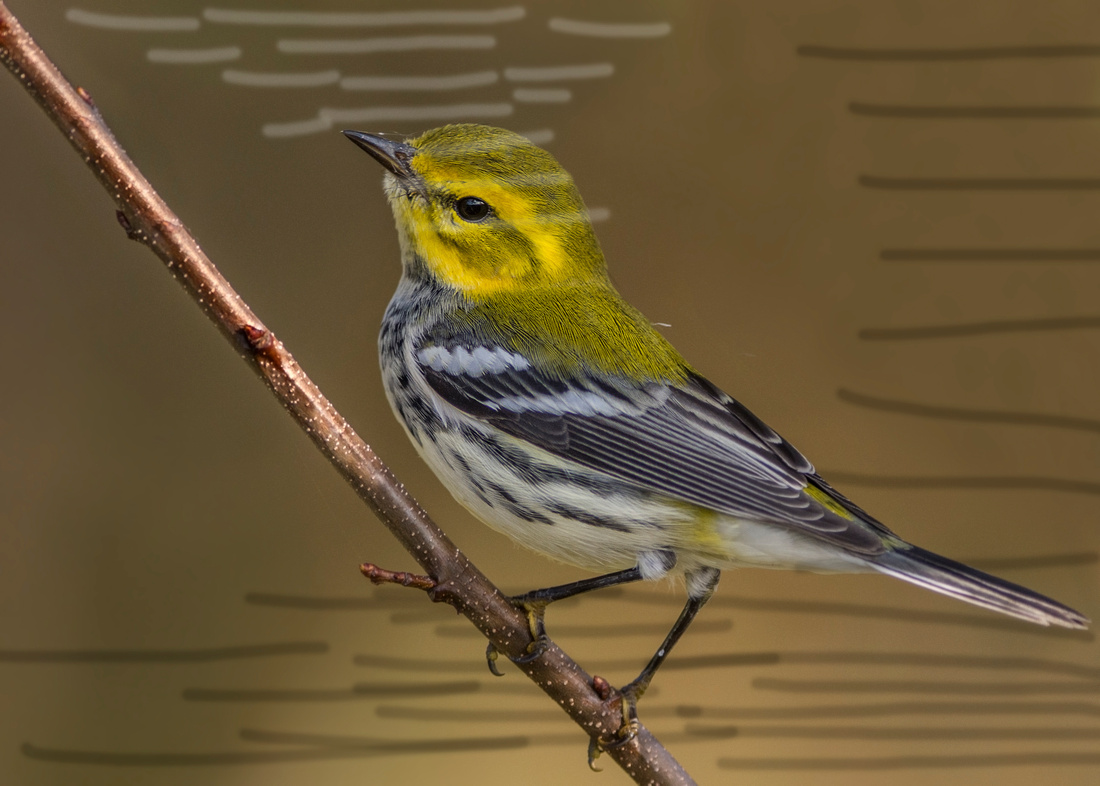 First we add the burn, again long the bottom and behind the bird, areas we want to de-emphasize.  Also at this time if there are any bright spots (sun hitting leaves, etc.) I would go to those areas and burn them.  Sometimes will do 2 burn layers in PS, one for global burning, and one for bright spots.  Below is a side by side of how this looks before and after with just the burn applied.  The image starts looking a little underexposed from the original, but we can fix some of that and we are going to raise exposure on the head in the next step.  One thing I want to do is bring the focus up from the bright area on the bottom edge to the top area near the head.   I also tried to burn down a few areas on the branch since there are "hot spots" from the sun.  Some people might even want to burn these areas a little more.

Next we will do a general lightening near the head.  Again, for me, this is a "curves adjustment layer" and I just paint in the area near the head as desired.  I can then control this layer independently and if feels like too much, I can use the opacity slider on this layer to dial it back.

Once the general dodge/burn is done, I will now look for details to highlight or areas where I could juxtapose this to add contrast.  Below is where I will highlight the eyes.   You can play around with this a lot on your own to see what you like but in general I go in tighter and dodge the top edge of the eye and the bottom edge, following the curve of the iris only.  I don't lighten the pupil area and leave that black.  I also see an area on the wing bars that I would like to make lighter and some highlights on the bill. 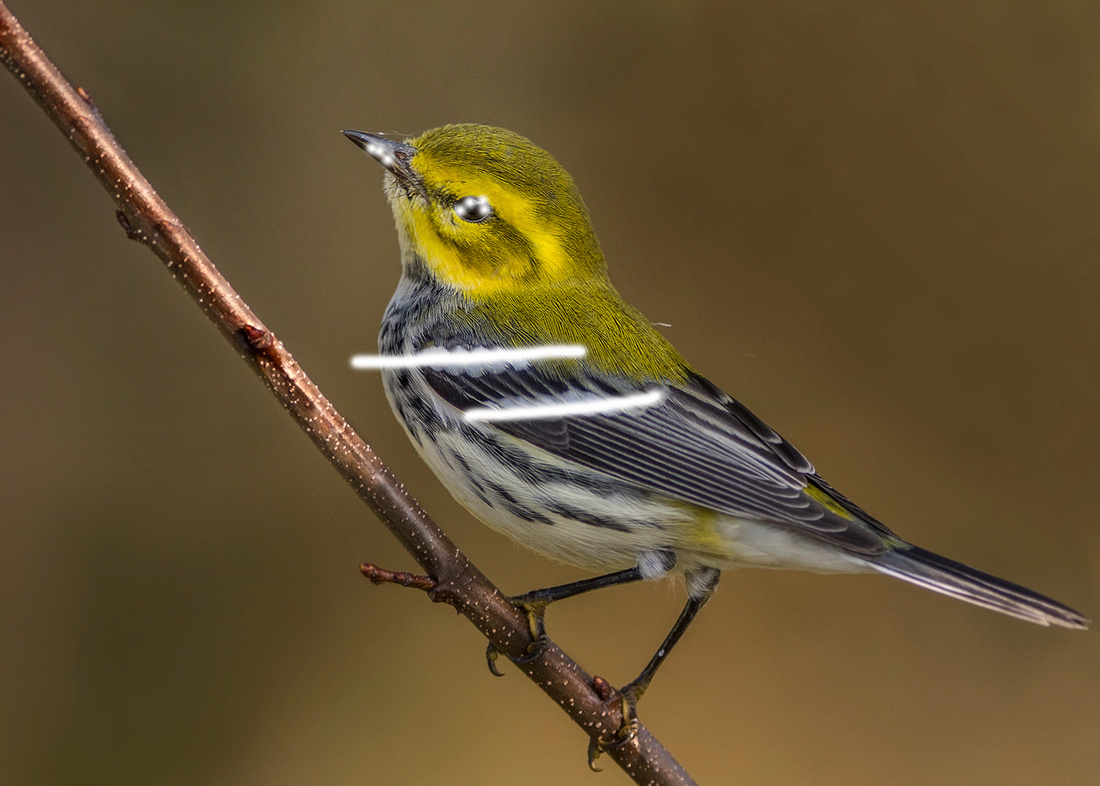 Below is the side by side of both images with the initial dodge/burn and shows the difference in just the specific areas that we highlighted: eye, bill, wing bars.  I think the head and eye are now the primary focus and you can see the color of the iris.  As a note, sometimes I will select the eyes and add a little specific saturation using adjustment layers, just like we did with curves adjustment.

Here is a larger version of the finished product.  Are your eyes drawn more the head and eye now? 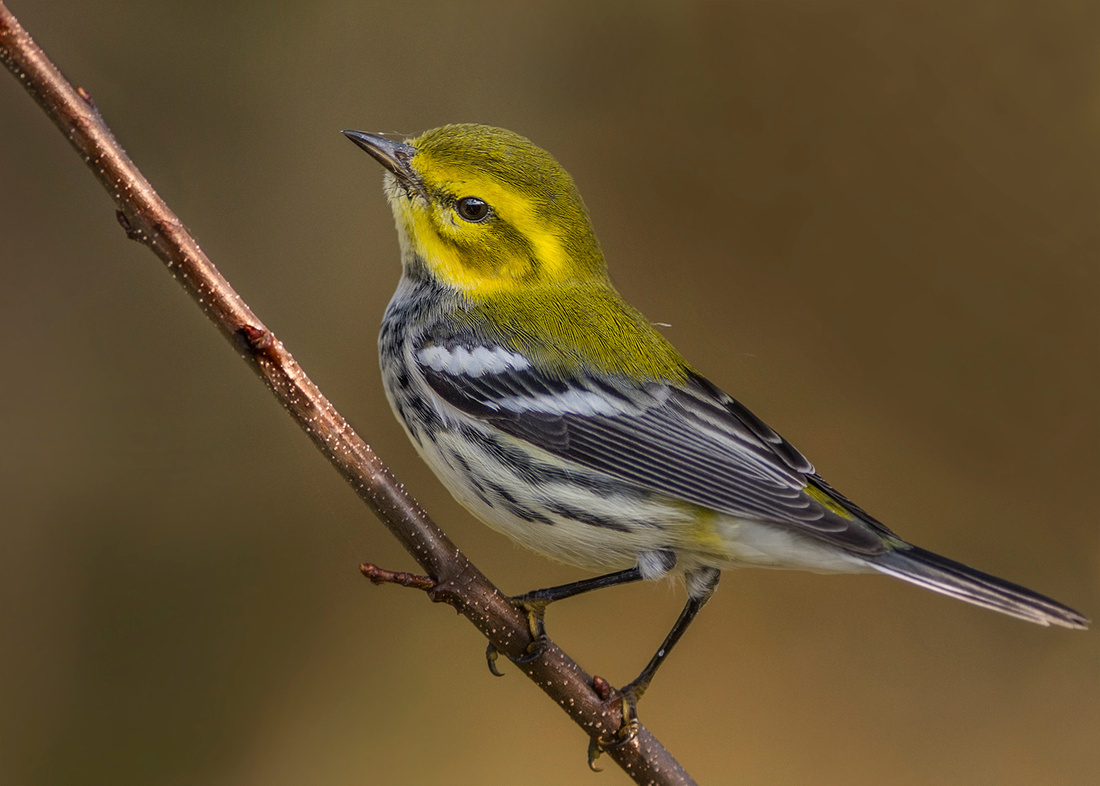 When you look at this finished version next to the original, you can see the difference.  The original was a nice clean portrait with good details and a nice pose.  There aren't any major issues with it, but the finished version to me is more complete and pulls attention to the area of focus better.  This entire process can literally be done in minutes and tweaked to your desire.  When doing this there can be a tendency to become heavy handed on the effects and you can lose the natural look.  When I am done, I will always toggle back and forth from the original image so see if I went too far.  Often I will dial back the effects, which again are all controlled independently on separate layers and can pull modified using opacity slider on each layer.  This gives you a lot of control at the end if you have adjustments that you want to make later.

I hope you found this helpful and now have a little better understanding of how very simple techniques can be used to enhance a photo and make it more appealing.  Sometimes these techniques can be used to help cover up blemishes in a photo, or create super dramatic scenes by really going over the top with the effect.  Normally I just use it in moderation to bring out some accents and ensure that the focus is where I want it to be.

Here are some other before and after images, good luck as you experiment on your own!

Above: Slight dodging on head area, burn the bright spot by legs, add pop to eyes

Above:  Just bringing out the eye with a little burn along the edge, very typical edit.

Above: Burned the bottom and to the right slightly, trying to get more contrast and drama out of the image.  While subtle, I think it works and makes a difference in the overall final image.

Above:  Trying to make this portrait a little more dramatic by burning more than typical, keeping the eye contrast with some fine dodge and burn on the iris itself since it is so large and prominent.

Above:  In this image, I removed the branch in photoshop, but otherwise this a very typical edit for me.  I burned the bottom and left areas behind the bird and added some directional "light" leading to the head.

Above:  Burn the brighter log (often wood may get bright) and add the standard dodge/burn areas.  Note when doing this you can create some 'banding."  This is a common issue that can happen when working with smooth backgrounds.  It will be up to the person editing to determine if this is too problematic.  There are some ways to minimize this is photoshop as well.

If you would like to watch a super simple tutorial on this technique, I made a YouTube video that can be viewed here: