The Grassland Birds of 2018

I spent some time recently with several species of grassland birds.  This blog will show a few of the species that I usually see in Pennsylvania.  The most prominent of these species was the Grasshopper Sparrow and I actually made several trips to capture them in various scenes with different light.  I was not able to get a really good image of an Eastern Meadowlark, which to me is one of the iconic grassland birds.  I was, however, able to get photos that I really like of two tougher species, the Bobolink and Dickcissel.  All of the birds featured were photographed this year.

I also included a couple of "fringe" species in this blog as they were birds hanging out in fields near the grasslands but probably not really birds that I would typically refer to for this habitat.  The miscellaneous birds included here are Indigo Bunting, Willow Flycatcher, and Barn Swallow.

This series was a lot of fun for me, I hope you enjoy the glimpse into my (slightly obsessive) world of birds photography.

To me, the Meadowlark is the iconic grassland bird.  Below, an Eastern Meadowlark perches in a farm field in eastern PA.  These bird have decreased in numbers in the state over the past few decades, mostly due to habitat loss. 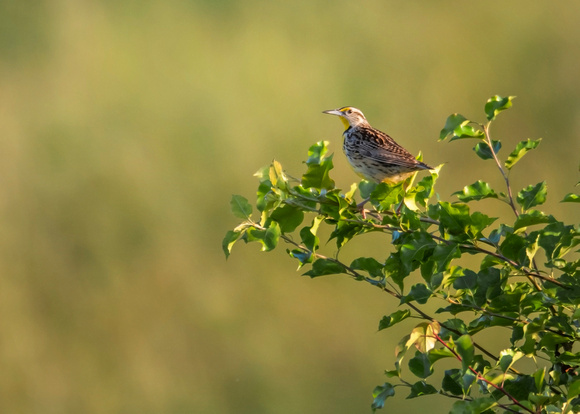 This bird has been tough to me to photograph locally.  I was able to find one in a freshly cut farm field, but wasn't thrilled with the light.  In order to get some in better light, I ended up going south to Delaware at sunrise, where there was a large protected grassland and a nice number of birds. 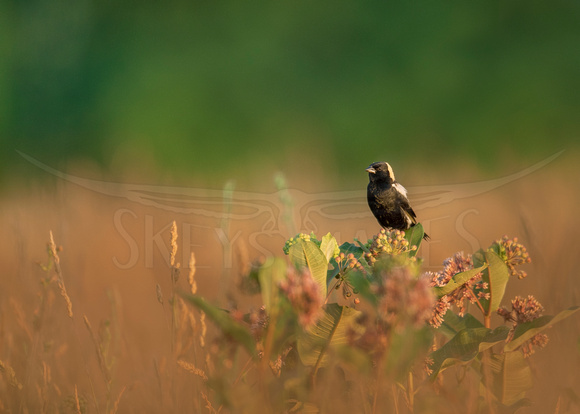 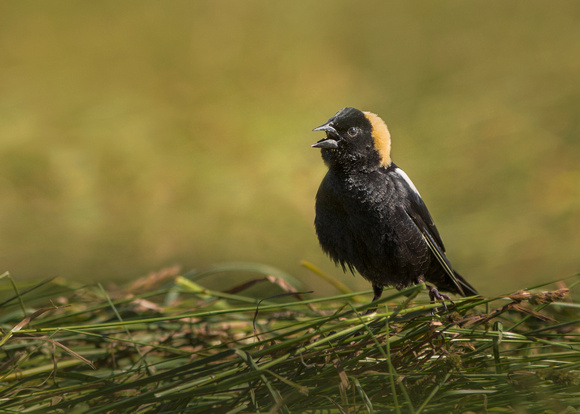 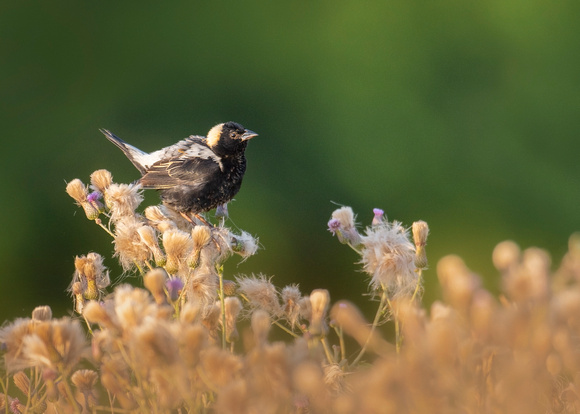 Dickcissels have become very rare in eastern PA.  I am lucky that each year, a small population returns to a farm area not far from my house.  I watched this bird (below) sing on a wire and drop occasionally to feed in an oat field below the wire.  Once seeing the pattern, it was easy to get some nice close looks.  These pictures were taken from my car.  With light clouds on the horizon, you can see some magenta tones mixed with the soft golden light.  The last of the three images, shows a female, buried deeper in the field. 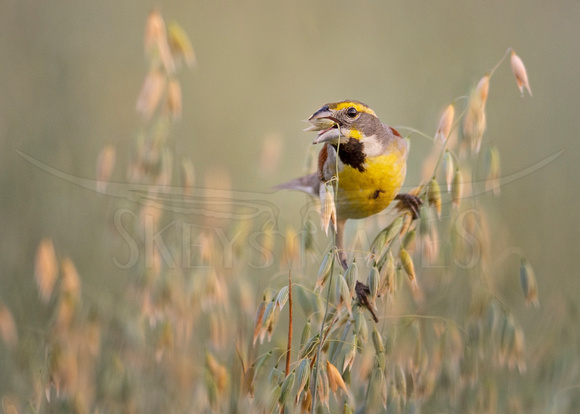 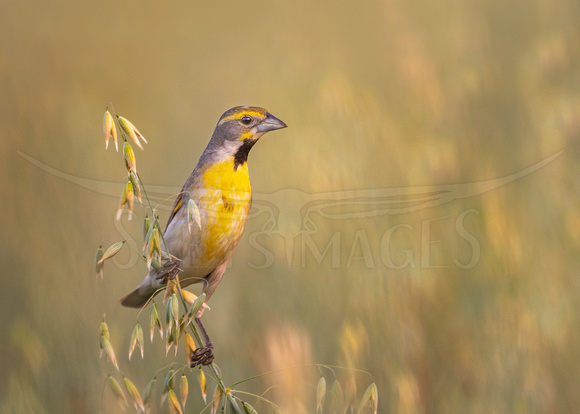 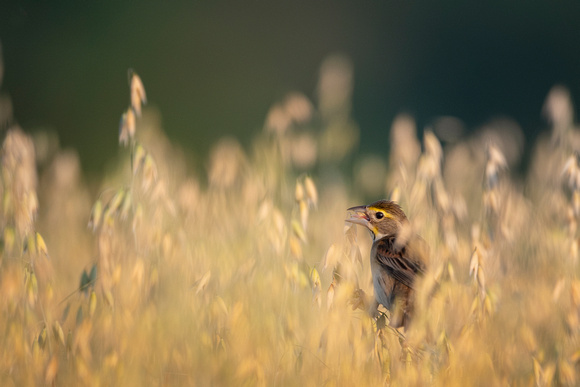 I have a hotspot for these birds near my house and spent many days with them trying to achieve different looks.  In the series below, you can see silhouettes, backlit shots, and a variety portraits at golden hour. 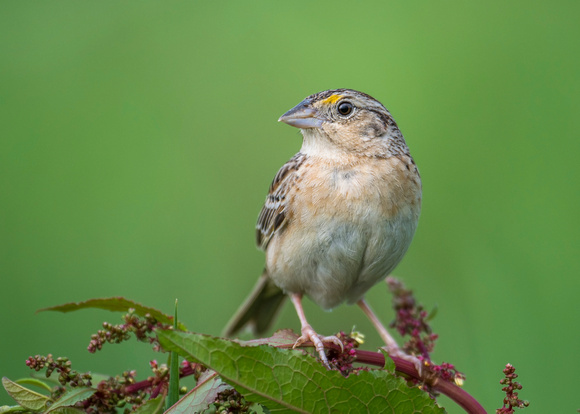 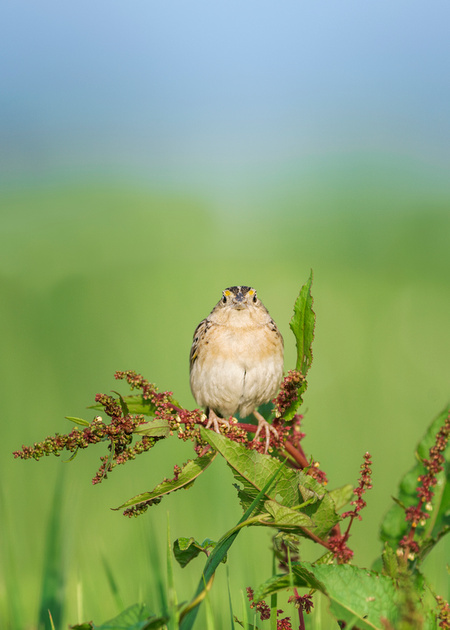 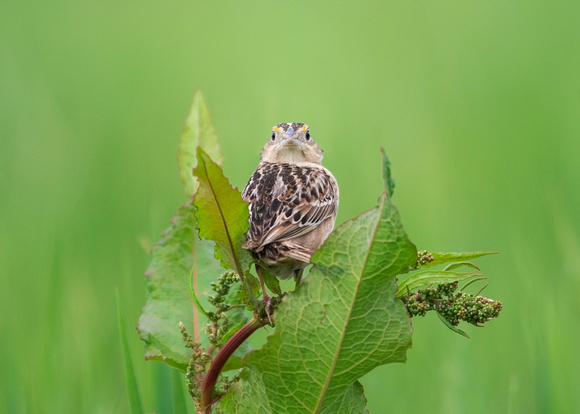 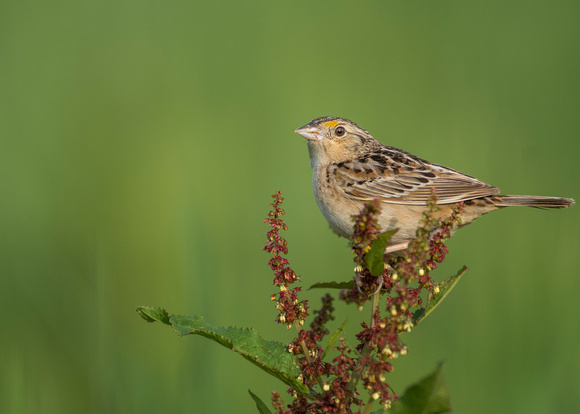 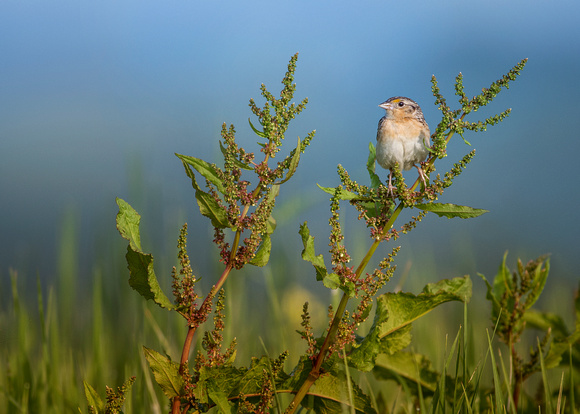 Another sparrow that I saw a lot of in July was the Field Sparrow.  My favorite was the action shot of one feeding on insects in thistle.  Once I saw the behavior, I focused on the thistle and waited for him to reach in and feed.  Another good example of observing behavior and anticipating action shot. 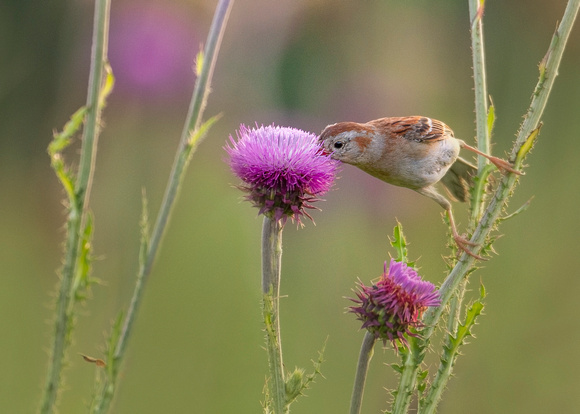 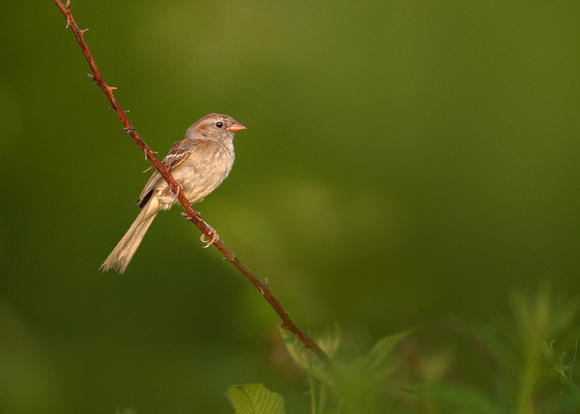 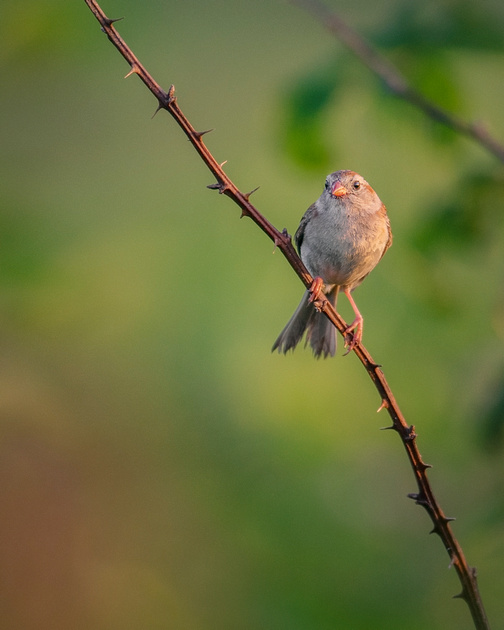 A common species that I wanted to include in this series.  Here composed on a thorny vine, framed by some thistle, followed by a tight side-lit portrait. 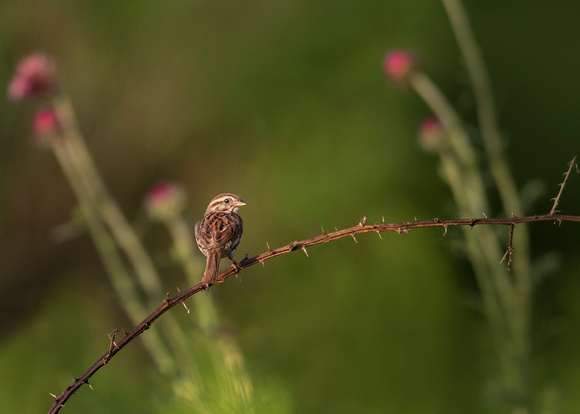 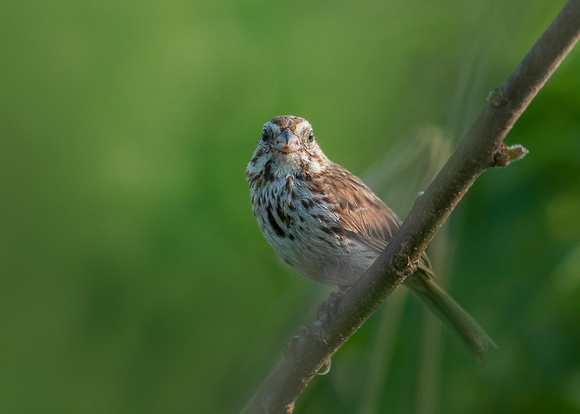 I love the colors on this bird and background in the first image.  These male buntings can range in color from a light aqua to a deep blue depending on the individual and breeding status. The second picture shows the blue bird on a yellow ground (sunflowers) that makes for a nice combination of complimentary colors. 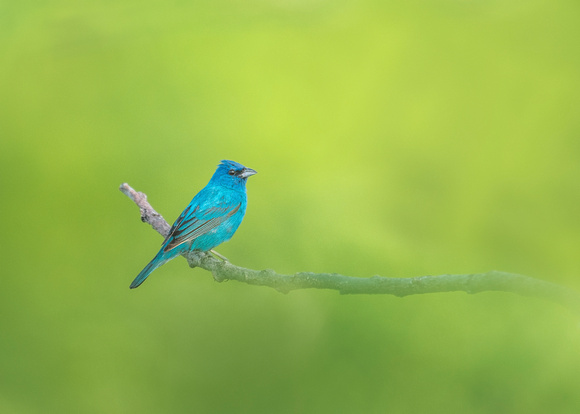 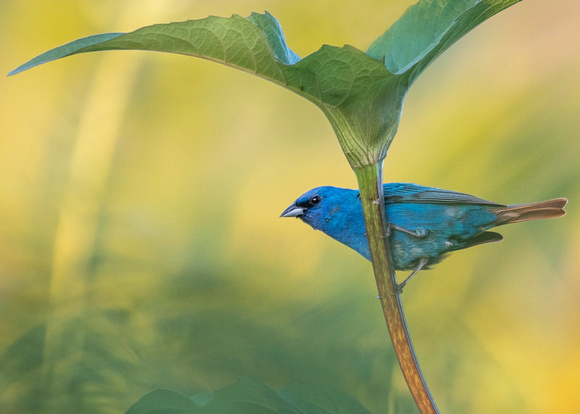 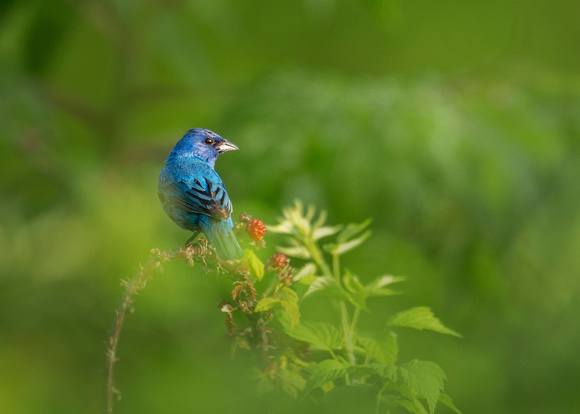 I set a challenge for myself one evening by trying to photography swallows in the rain, in flight.  At slow shutter speeds 1/200-1/500, this is a real task.  I took hundreds of frames and finally managed to get a few that showed sharper heads and gave a sense of motion in the rain and wings. 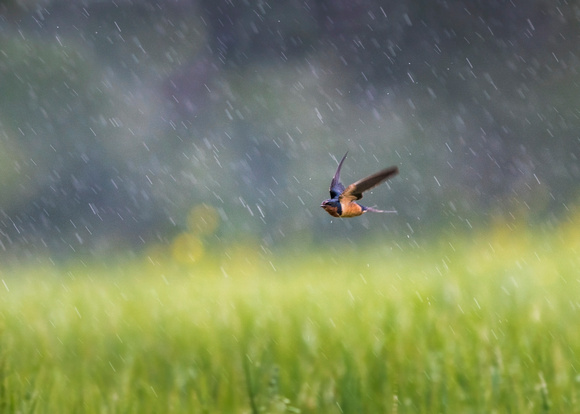 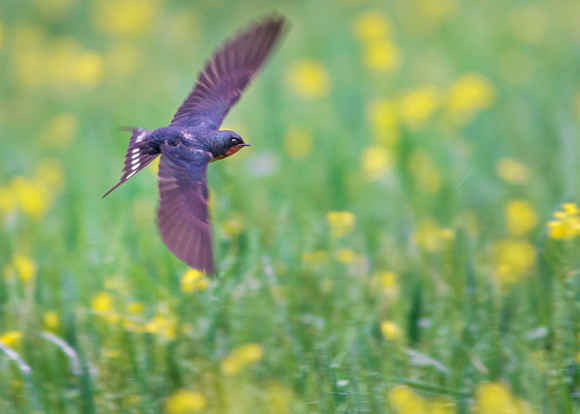 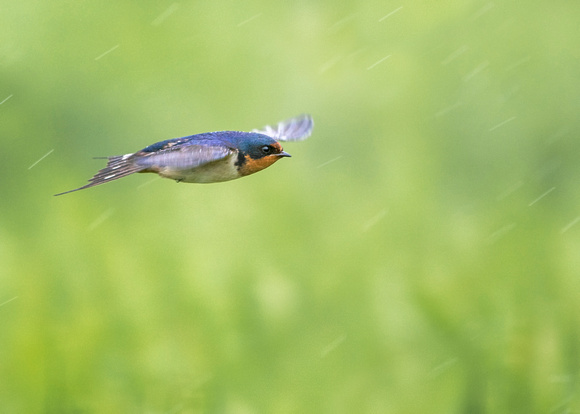 While not usually thought of as a grassland species, this Willow Flycatcher in eastern PA, was adjacent to the grasslands that I was working, and he presented so nicely, I had to get him involved here.  These two images were taken on different days and in different conditions.  The top was taken during golden hour and the bottom pictures was taken on an overcast, rainy day. 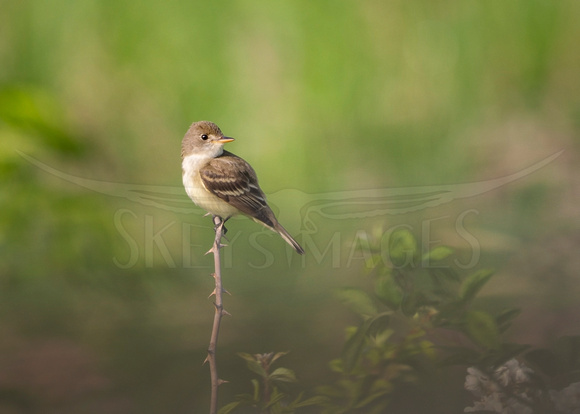 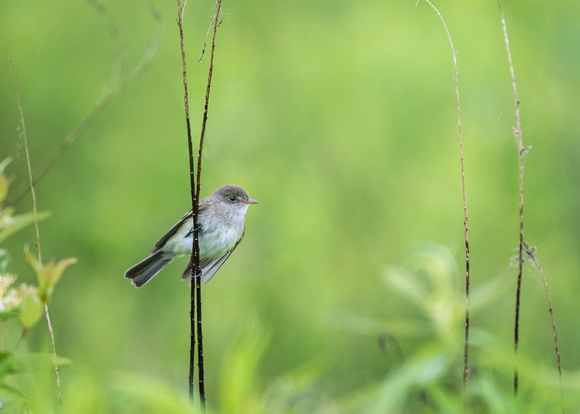