When I think of my bird photography, I break it down into 4 primary categories; Songbirds, Shorebirds, Waterfowl, and Raptors.  Of these, I believe birds of prey to be the most challenging of all.  There are many reasons for this.  As predators, these birds are extremely alert and have amazing vision.  Sneaking up on them just isn't going to happen.  These birds are also most active mid-day or evening and light is not always at its best.  This can often result in images taken in direct or harsh sun.  Another reason they can be tough, they are often in flight and overhead, so perspective is not always ideal.

While I appreciate the challenges of raptor photography, I also appreciate the art of hawk watching in general.  Because of the difficulties in attaining great shots, you really have to enjoy the process of hawk watching.  I will often spend 4-5 hours a day just looking at passing raptors, hoping one will fall into a zone that allows for great images.  But even when I fail to capture those moments, I enjoy the quiet of the mountain and the process of observing from a distance.   For those wanting to photograph migrating raptors, I have some advice.  First and most importantly is to be patient.  You must learn to love the process and invest time to make it work.  Also, learn about the spots that will offer you great vantage points and hopefully close looks.  A little research here goes a long way.

This fall, I spent my usual time at my local hawk watches.   This means 2-3 days a week for 5-8 weeks.  I am lucky to be just 10-20 miles from a few good places along the Kittatinny Ridge.  This is one of the top migration paths in the northeast and includes the historic and very popular Hawk Mountain.

The species I was able to photograph this year were Broad-wing Hawks, Red-tailed Hawk, Merlin, Cooper's Hawk, and Sharp-shinned Hawks.

While "sharpies" constitute the bulk of my photography, Broad-winged Hawks are actually the most common sighting.  These birds move through in large numbers over a relatively short times span.  These social birds come in the middle of September and over a few days, there are thousands seen along the ridge.   This year I got to witness one strong morning flight that had almost 1,000 birds recorded by noon.  These birds are known as high soarers, using thermals to gain height and cruise at elevation.   For this reason, I have found them very challenging to photograph.  I shared one image from 2018 on social media and it can be seen below.  This bird flew a little lower and the light wispy clouds broke up the blue sky.  This adult bird is also showing some of his eye, which I often don't get to see when they are flying high overhead. 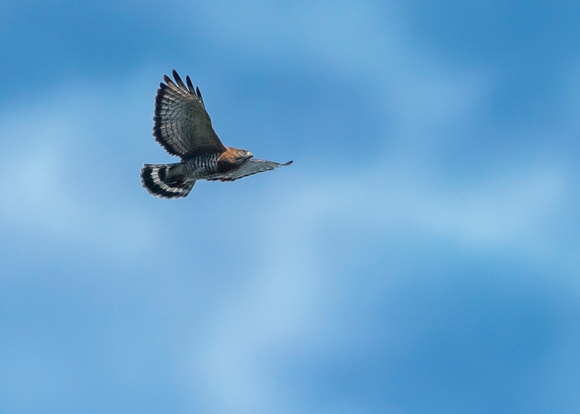 Broad-wings belong to a family know as buteos, and the other buteos that frequent the ridge are Red-tailed and Red-shouldered.  Both of the later are late migrants and I did not have much luck with either.  Both were seen, but I only managed one photo of a Red-tailed that I liked, as it shows a nice topside look with a nice green background. 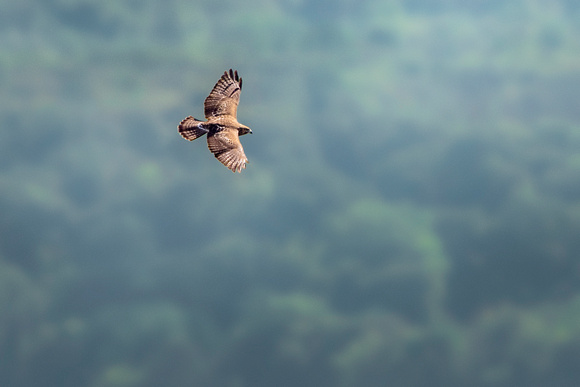 Falcons pass by the ridge regularly and include (from smallest to largest) American Kestrel, Merlin, and Peregrine.  We do not see many of them at close range, but occasionally one of these speedy birds will give us a close look.  This year, I only had one really close view of a Merlin, seen below popping up in front of the lookout.  I had a couple distant pictures of Kestrels this year, but nothing that I shared publicly. 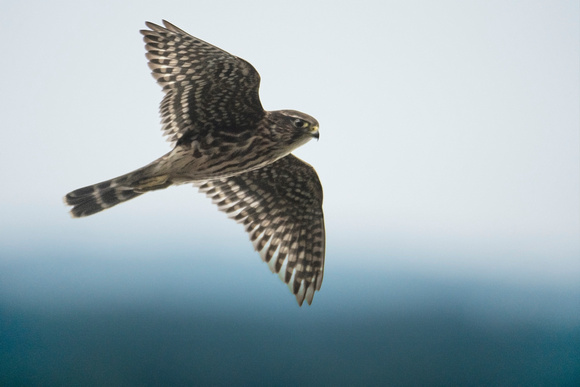 Sharp-shinned Hawks are the second most numerous raptor that I see on the ridge, and they offer the best looks.  This is usually because they are more curious and aggressive.  They will often make close runs past the look out to investigate or harass the owl decoy.  Below is a series of pictures captured this fall.  The majority of the birds are juveniles, identifiable by they streaky breast and more brown color.  The adult bird morph into birds with grayish top sides and more solid, rusty breasts.   Eyes on the these birds change from yellow to red as they mature. 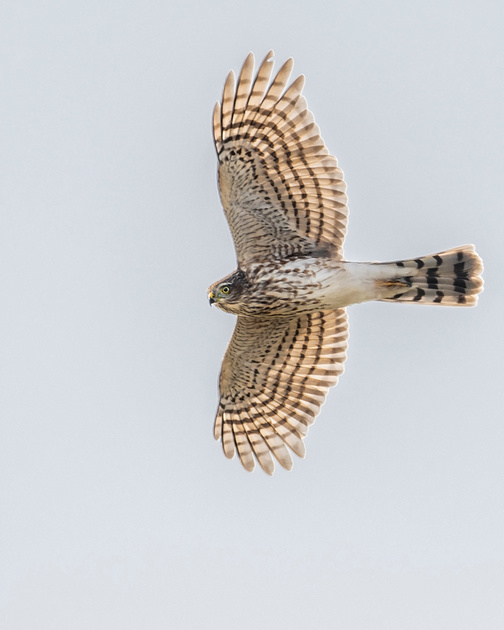 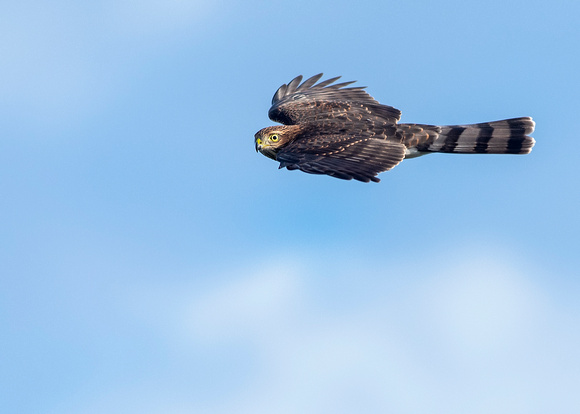 (Above: Sharp-shinned Hawk in the clouds) 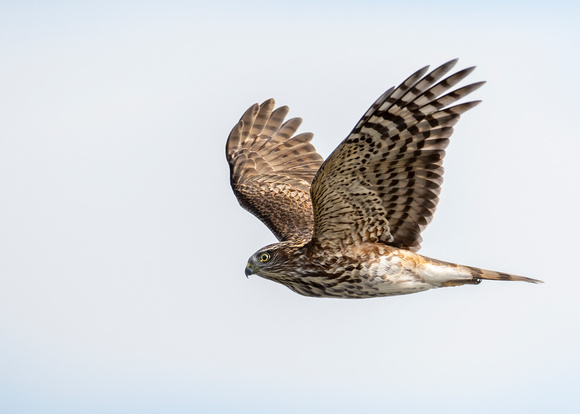 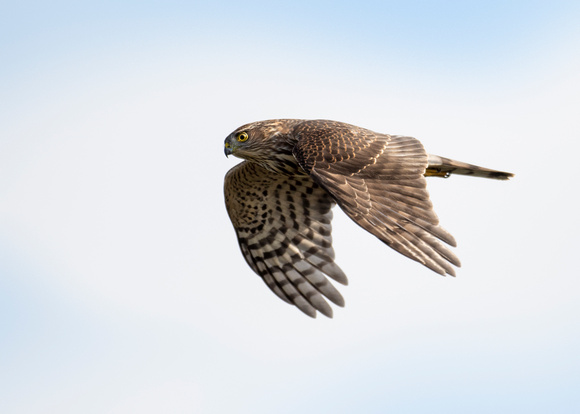 (Above: Sharpie with wings in up and down position) 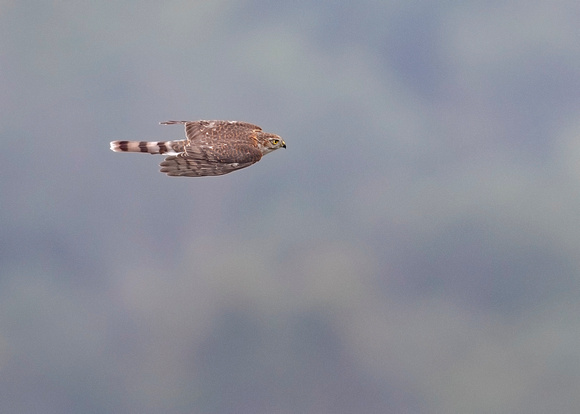 (Above:  This bird is in a stoop, wings tucked and gaining speed) 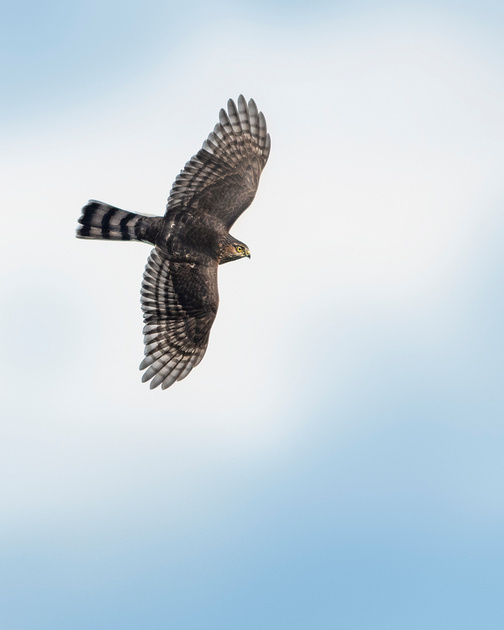 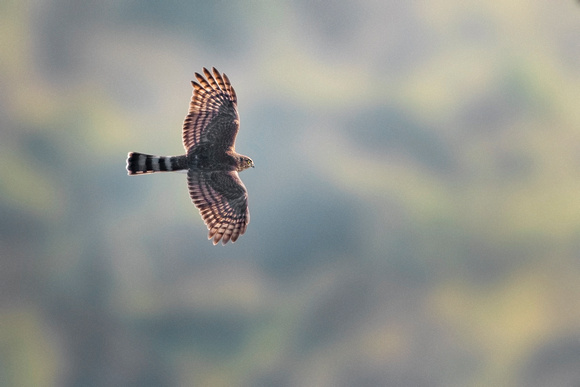 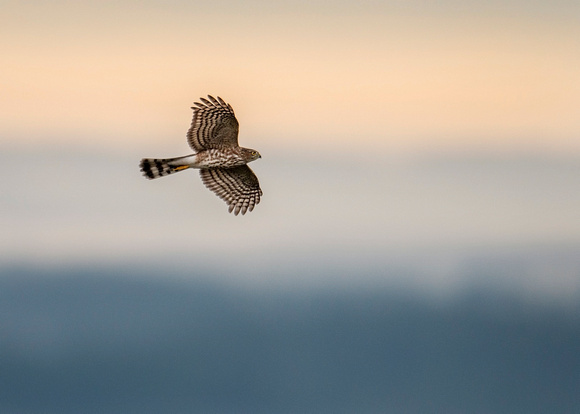 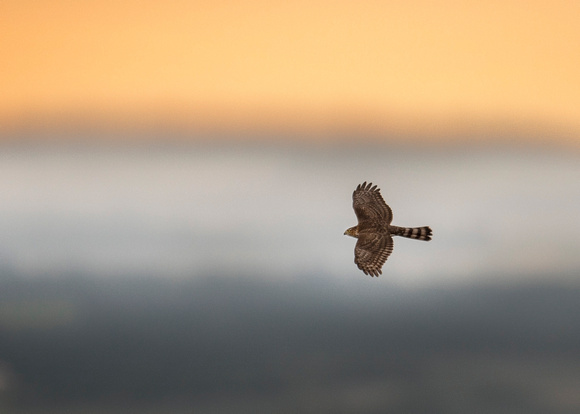 (Above: Sharp-shinned Hawk at dawn over fog and rising sun, a rare golden hour look) 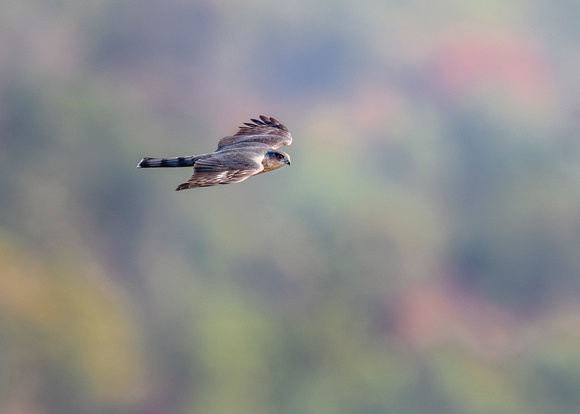 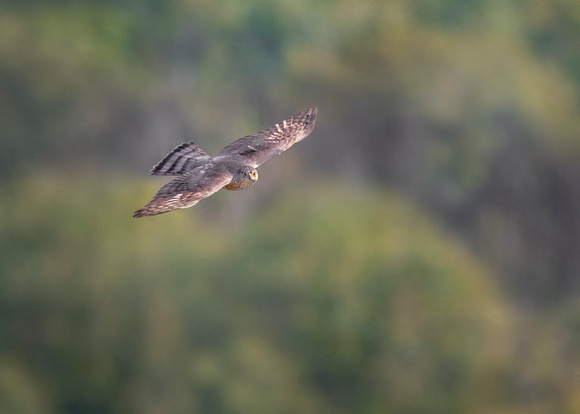 (Above:  Adult Sharpies in the "bowl" allowing solid background with hints of fall color) 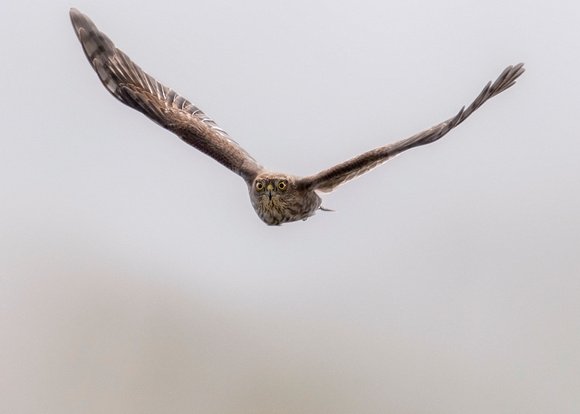 (Above: Juvenile bird displays its "bugeyes") 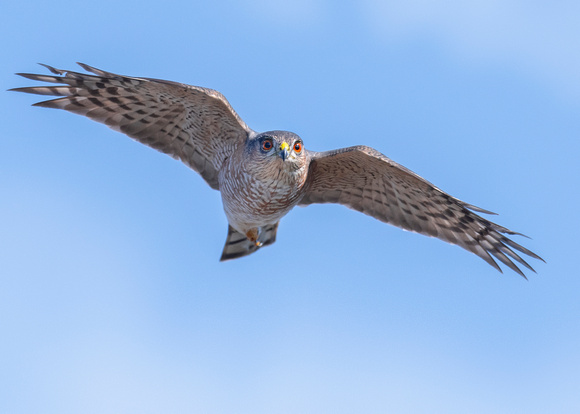 (Above:  An image I have wanted for a while, adult, head on, showing the beautiful red/orange eyes.) 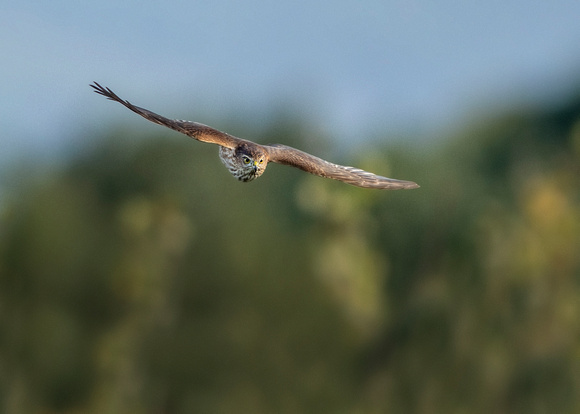 (Above: My favorite image of the season puts this Sharpie right on the horizon, giving the approaching bird a sense of placement)

In, all I felt it was a good season of hawk watching.  I got some nice photos and spent lots of time relaxing in a stress free place that helps me to connect with nature.  I was fortunate to capture, not only raptors, but some nice migrating songbirds along the ridge as well.  While the process of photographing these migrating birds can be very tough at times, if you like the overall process, it can be exceptionally rewarding.