Backgrounds for Birds - Part I

When I talk to people about bird photography there are always a few key points.  Once a beginner has a good understanding of basic photography principals such as exposure and a basic understanding of how their camera operates, I encourage them to focus on a few foundations that can quickly elevate their images.  First and most important is light.  I always start with the basics of light, composition, and perspective.  Once the basics are understood, I like to approach images from a more holistic standpoint and focus on moving beyond the subject and start to think more about the environment.  To this extent, I wanted to focus this blog specifically on backgrounds.   I am going to approach this in four parts.  The first part will look at backgrounds as an overview and how light, color and distance affect the overall images.   The second series will deal with distance and aperture.  Part III will be about specific positions of birds relative to the backgrounds: perched birds, low angle birds, and birds in flight.   Finally, I will look at how seasonality plays into the environment and how to maximize the impact of your images as the seasons change.

Below are some bullet points that show what I think of when considering any background.  Each bullet point will later be expanded on with examples.

-Light  Like anything else in photography, your backgrounds will be determined by the strength and warmth of the available light.  As the photographer you may be able to use these to your advantage to produce pleasing or interesting backgrounds.  Golden hour, blue hour and overcast lighting can all create some great backgrounds while shooting in harsh direct, light is not favorable for pleasing backgrounds, as the light will often catch leaves or sticks and create hot spots.

- Color  I will discuss this more in the seasonal conversation, but in general backgrounds that are more solid or have interesting patterns are preferred to those that might have large breaks of sky or patches of white and blue included.  Most bird photographers agree that solid blue skies or white backgrounds are not ideal.

-"Seeing through the bird." I use this term a lot and am referring to the moment we are capturing our scenes.  Sometimes we get so locked on to the subject or the action that we forget about the image as a whole.  I challenge myself to think past the subject and see the whole scene as a total.  When setting up for a shot I am always trying to find areas that will include pleasing backgrounds.  Over the last few years, I have learned to chase birds less, and set up on locations more, hoping they come to me.  You will have fewer images taken, but the ones you get will be so much better.

The foundation of all photography is light and this is always a consideration when I pick a day to photograph.  Below are examples of different lighting and the effect the lighting has on the overall image and background.

Blue hour can make for interesting colors, especially if including skies in your background.  I often take the approach if treating blue hour photography as a landscape with a bird in it.

In the image below we have a Least Tern that was photographed before sunrise.  You can see that there is lower light available and the subject does not pop like it would in golden hour.  When shooting before dawn, you can take the approach of shooting back lit or front lit and get pleasing and interesting results, but notice the inclusion of sky.  Without the sky, what is this image? 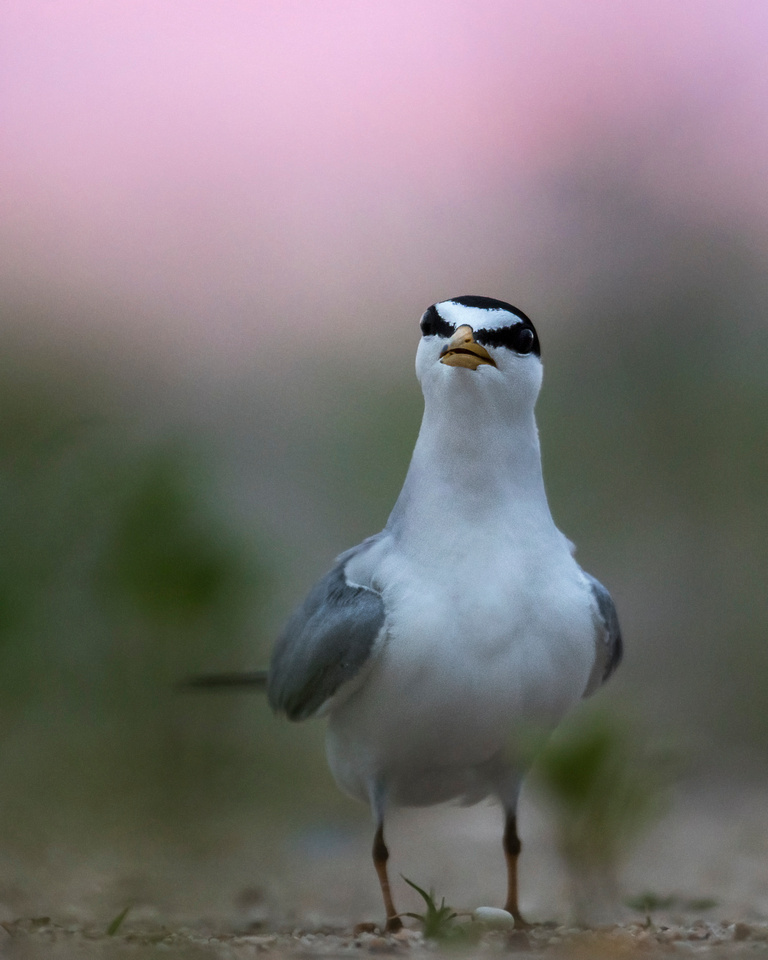 In the next blue hour example we have a Common Tern from a different date and location.  You can see the powerful pinks and purples in the background that were created by a large cloud (pink) against a darker pre-dawn sky (purple)   If this same image had been shot during the day with a solid blue sky, I would have found it uneventful and not worthy of sharing. 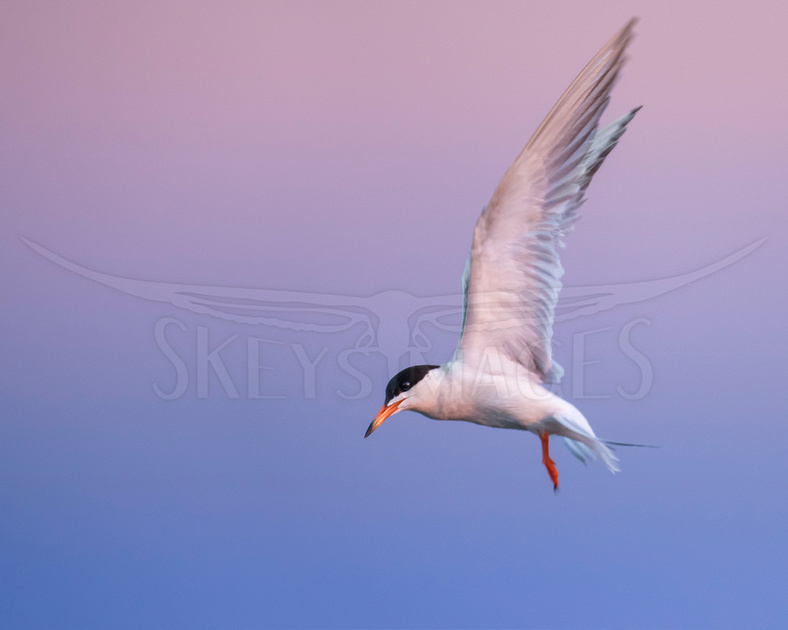 As a general rule, golden hour never fails.  No matter the direction of the light, you always have a chance in golden hour.  My favorite subjects in golden hour (assuming direct sun) are shorebirds and waterfowl.  Songbirds and raptors are also wonderful, but based on habitat they are sometimes harder to find in open locations.  Any species that you can isolate in the open is great for golden hour photography.

Shooting waterfowl in golden hour is great and the examples below show you the warm colors brought out in the marsh grasses behind the subject.  This is also where perspective becomes so important.  Sometimes creating a great image isn't about just a great subject in great light.  A total image sees beyond the subject.  When setting up for the shot below, I actually picked my background first, then waited for ducks to move into that area.  Note in these examples the light is hitting the far shoreline and adding vibrant colors to the grasses.  Again, in order to achieve this, you will need to be shooting ultra low angle (to be discussed more in part II). 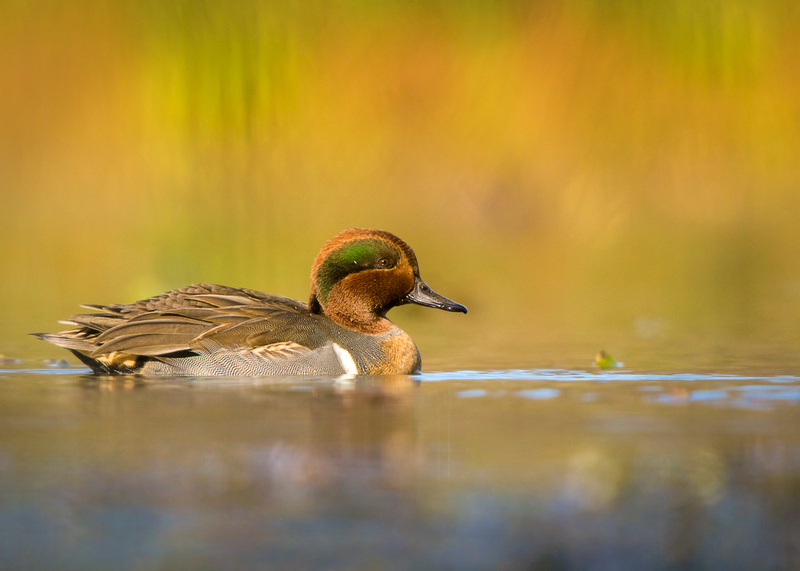 Here is an example of a songbird in golden hour.  This works for a few reasons.  The bird is isolated and exposed to the light.  While Black-throated Blue Warblers are often in thicker wooded areas, this bird was on the edge of a parking lot in an area that allowed the first light to come up.  I noticed him in a tree with some nice perches and got excited about the possibilities.  The rows of trees behind the subject were further back so I knew I had great separation.  You can see the gold tones not only reflected on the subject, but you can also see the nice soft warm tones that enter the background. 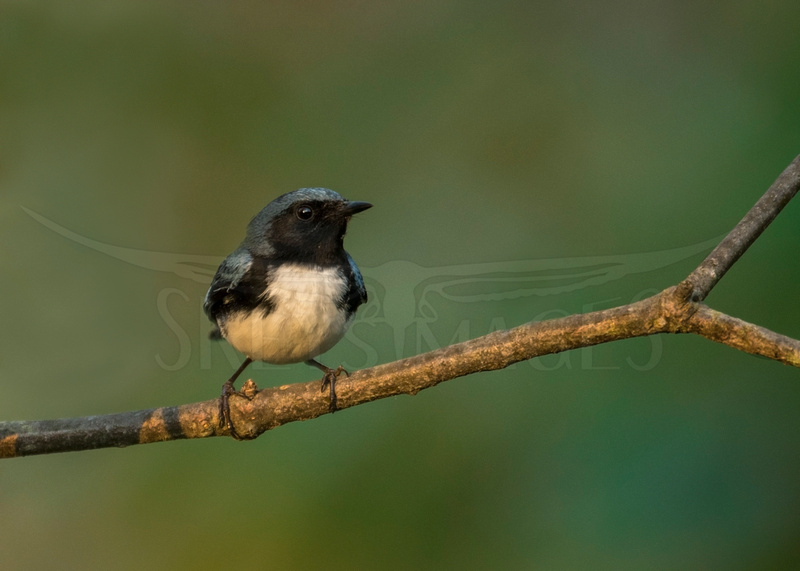 This final image shot at golden hour helps introduce a topic that we will explore a little more later: depth.  This Black-crowned Night Heron shot at dawn shows an almost pure solid background.  This is achieved by huge separation between the subject and the marshes behind it.  At several hundred feet, the backgrounds just disappear into a canvas of soft green.  Had I set up a little lower, I would have included some sky in the image, which may or may not have worked.  In this case, I wanted a solid green backdrop and adjusted my perspective to make sure that's what the final product included.  This is also a good example of "seeing through the subject."  My first position did not include this solid green background and while the subject looked the same, I kept moving laterally  until I found a spot with the framing branches to the left and a solid background behind. 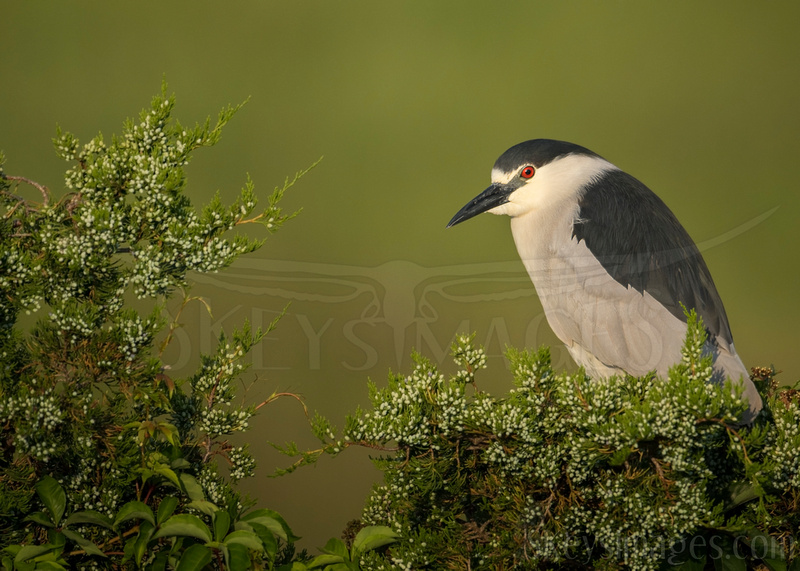 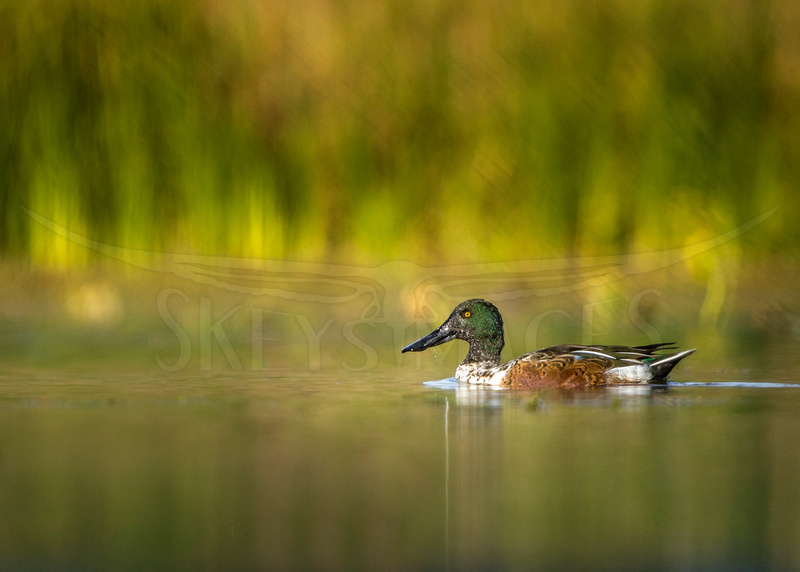 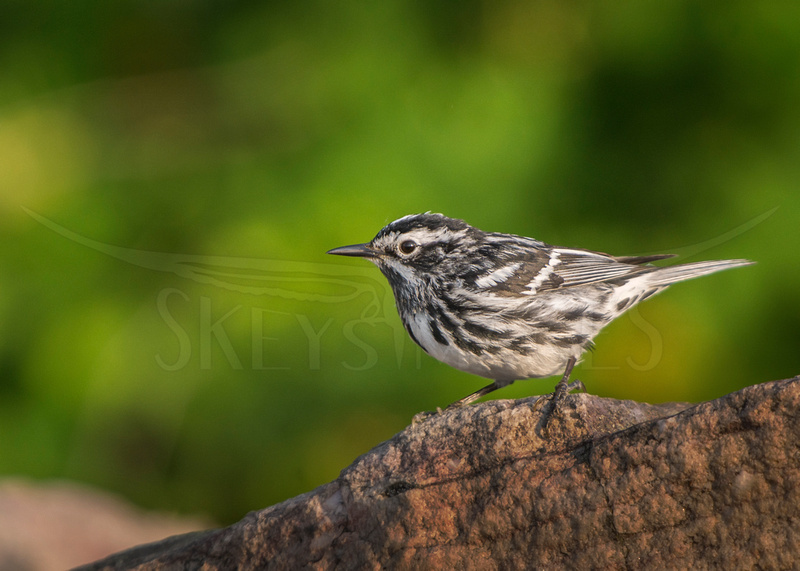 At the Lookout (Black-and-white Warbler) 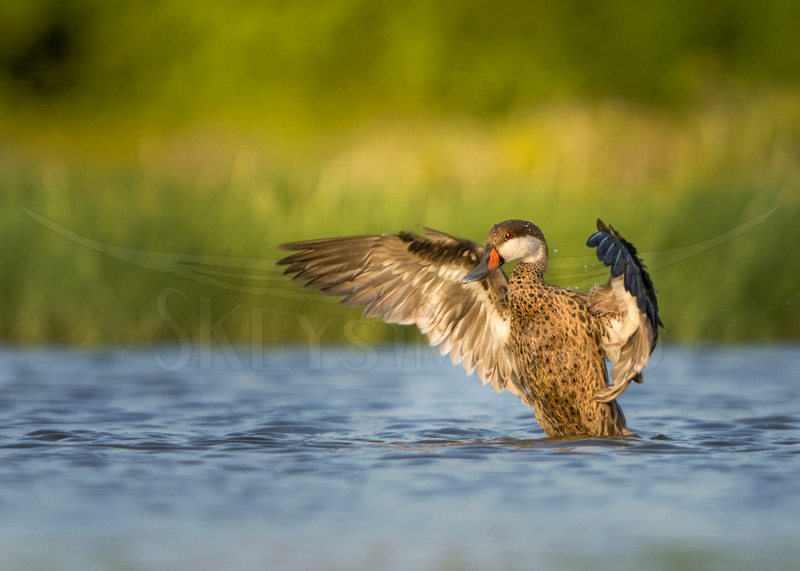 Overcast light may not seem appealing to everyone, but it is actually one of my favorite conditions to shoot in, especially when shooting songbirds. For one, it allows me to shoot longer.  Rather than just an hour in the morning, I have several hours of usable light and that gives me more time to locate those pesky warblers.  When shooting in overcast conditions, you will minimize hot spots in your backgrounds and your greens will become dark and rich.

In the example below, a black-and-white Warbler sings on an isolated perch.  I chose this area because there were several perches around and nice separation in the background.  While this was several hours after sunrise, the overcast skies allowed soft light to be used.  You can see how rich the background color is on this scene and the monochromatic, patterned bird really pops on the solid rich background.  This juxstaposition between subject and background has made this one of my favorite warbler images to date. 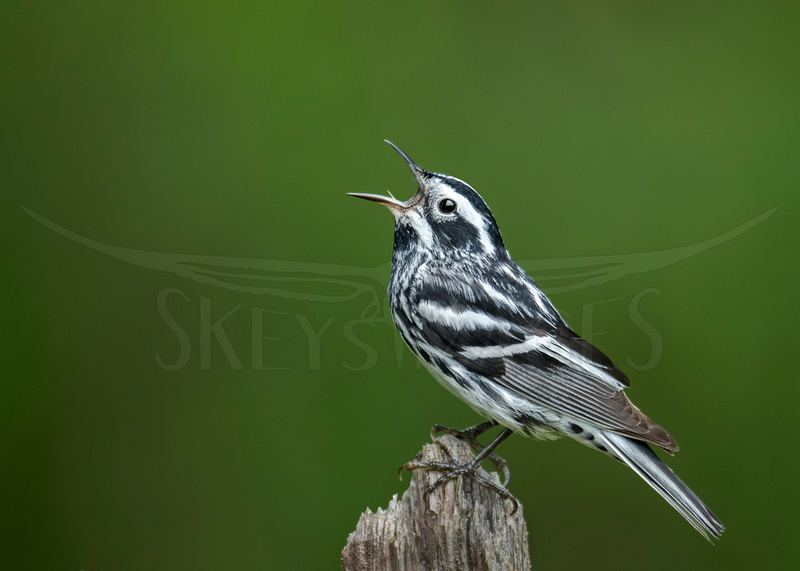 I am including a few other examples here of songbirds captured in overcast conditions with backgrounds that I liked.  Note the various shades of background colors that don't show any bright reflections from direct light. 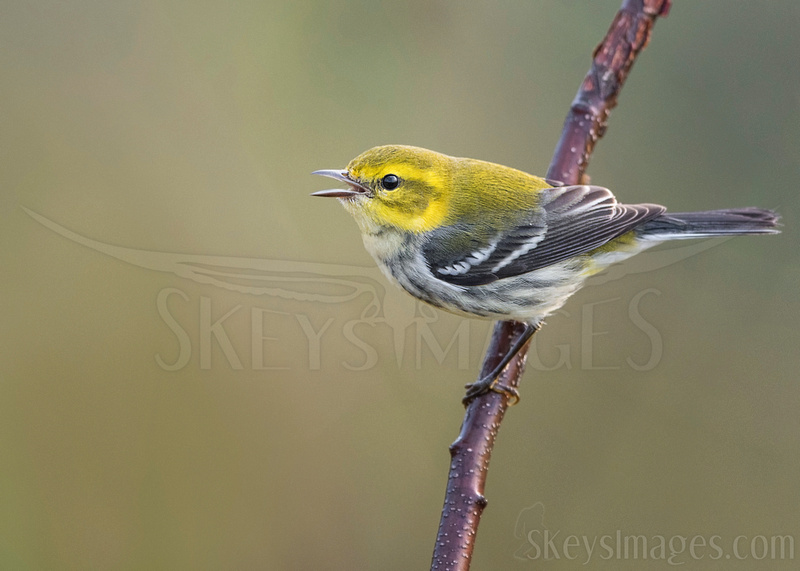 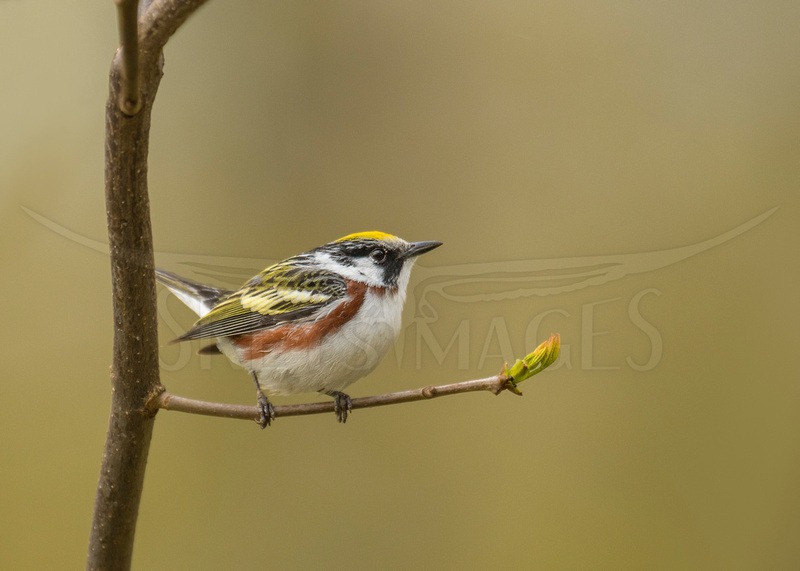 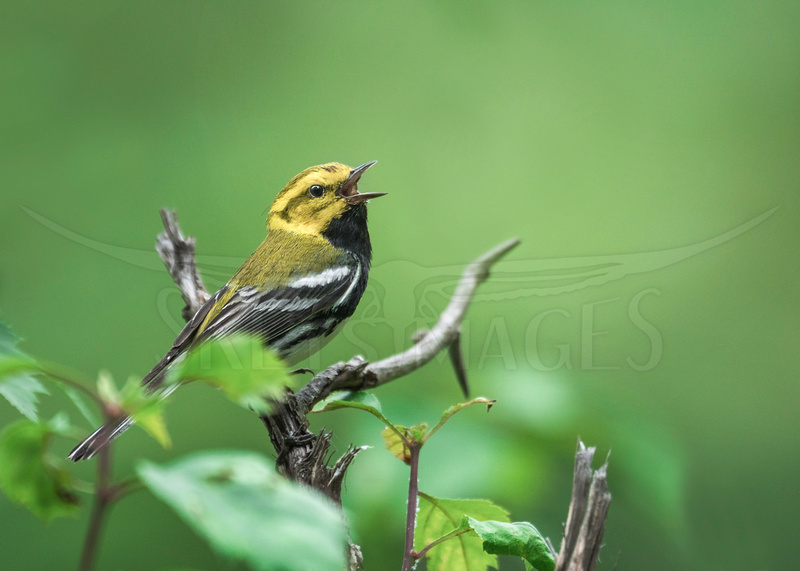 The last examples about light that I wanted to share deal with more direct light and how you can achieve some interesting shots under these conditions.  When I talk about direct light, I want to be clear that the light should have some direction to it.  Direct overhead light is tough to deal with for almost all bird photography.  Think about light maybe 2-3 hours after sunrise that is not overhead, but much stronger than the soft golden hour light that we all covet so much.  When shooting in direct light you can get some interesting results.  I like finding areas were the subject may be in light, but the background may be in shade.  When doing this, you have to be careful to expose properly for the subject.  If the subject is white or a lighter color, and you expose for the whites on that bird, you will see that the backgrounds become underexposed offering huge contrast which really helps to give a sense of isolation.

In the example below, a Common Merganser is captured in more direct sun but the background is not.  By exposing for the white breast, the bird really stands out. 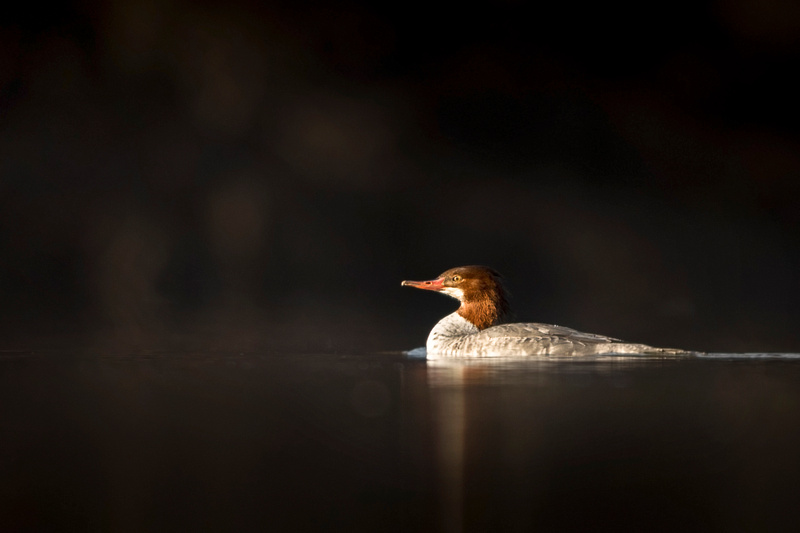 On this Eagle image, the same theory applies.  Exposing for the white head made the rest of the background, which was in shade, become almost black.  The strong contrast makes this a more powerful image, especially when you look at the powerful pose that this bird of prey is demonstrating. 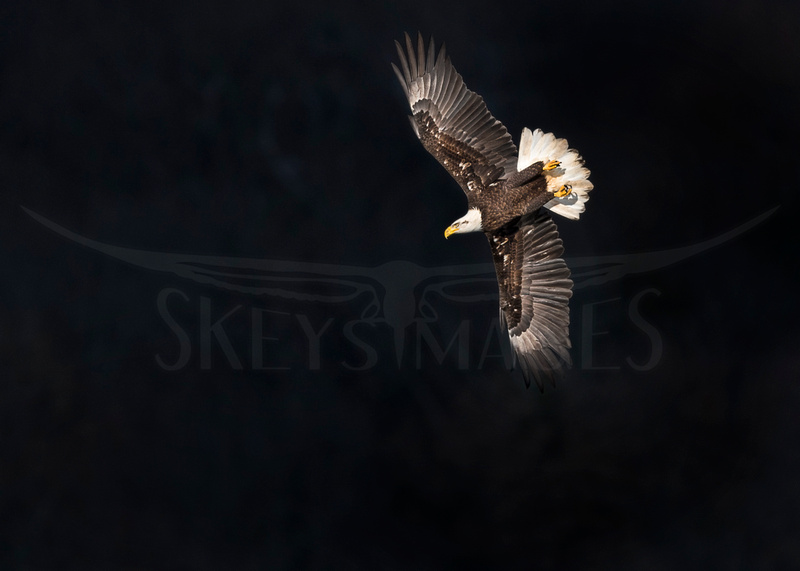 More Examples of Light and Background

The Kinglet below is shot in late morning, when the sun is getting stronger.  However, shooting this back lit allows the light to soften through the leaves while providing a nice rim light on the bird. 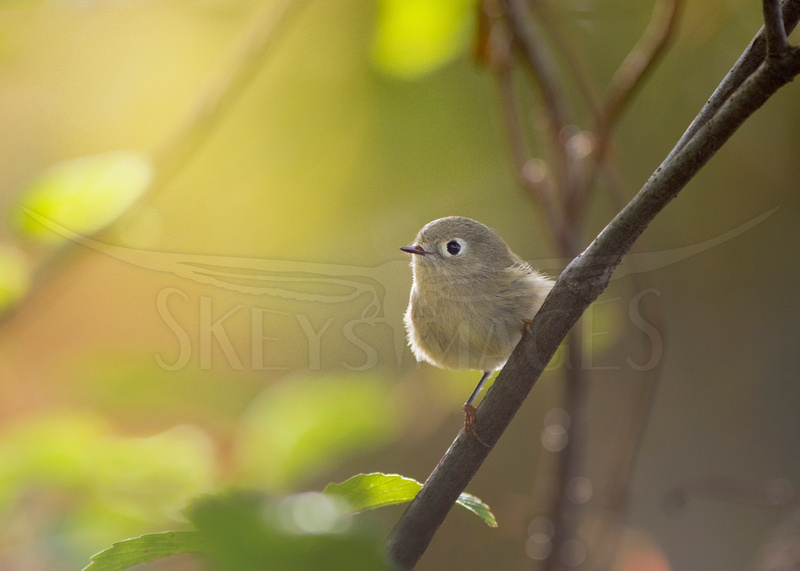 Finding a wet area on the rocks behind the bird brings in specular highlights from the reflections in the morning sun. 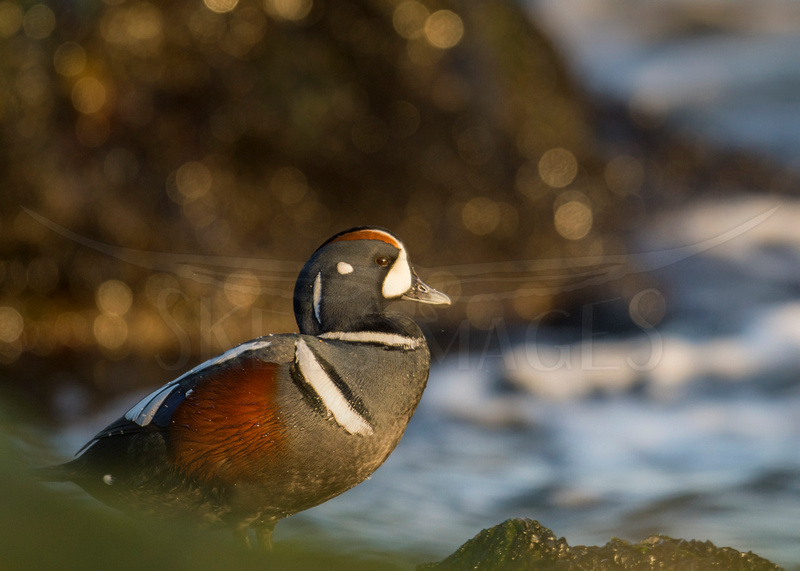 I hope this was helpful in seeing how different light can be used to create different types of scenes, in the next part of this discussion, we will take a look at how distance and aperture affect your backgrounds.

Laura (The Afternoon Birder)(non-registered)
Really great series! Love the details you provide and the photographs to back up your examples. I'm going to try to "see through the subject" like you suggest.
Michael Moore(non-registered)
Some very good points to think about. One small correction: The second tern image is of a Common Tern not a Least Tern. A beautiful image by the way!
Jennifer Sylvia(non-registered)
I am so glad I stumbled upon your blog. Thank you for taking to time to give such detailed examples of your photography approach. I will be rereading, and taking mentl notes.
Rick Alvarnaz(non-registered)
An excellent discussion on backgrounds and light, which do make or break an image. I like your point about seeing through the subject. The accompanying photos are spectacular, and really do illustrate your points well! Thanks for the info.
Khurram Khan(non-registered)
Very informative read
No comments posted.
Loading...
Subscribe
RSS
Recent Posts
Photographing Waterfowl 2018 Best by Month Fall Hawk Watch and Sharp-shinned Photo Study Birds in the Rain The Grassland Birds of 2018 Spring Warblers 2018 Different Light, Different Birds Bird and Backgrounds Part IV - Seasons Backgrounds - Part III, Different Birds, Different Backgrounds Backgrounds for Birds - Part II, Distance
Keywords
bird photography avian background backgrounds. duck ducks waterfowl 2018 best
Archive
January February March April May June July August September October November December
© SKeysImages
Powered by ZENFOLIO User Agreement
Cancel
Continue